They’re calling it ‘The World’s Most Magical Celebration’ and it's a new entry on the travel bucket list of Disney lovers around the world.
On October 1st, 1971, after years of imagining and building, Walt Disney World Resort opened in Florida, taking the magic of the Disney universe and beloved characters from the silver screen to real life.
Half a century later, some would say Disney World is even better than real life. With millions of visitors every year, the ground-breaking theme park, against which all other theme parks would be measured, has created family memories and adventures of millions of lifetimes.
To celebrate, Disney has planned ‘The World’s Most Magical Celebration’ lasting a full year and a half beginning October 1st this year, and going all the way through 2022 and beyond.The 18-month gala features new experiences at the resort’s four theme parks and even beyond, where shimmering ‘EARidescent’ moments and décor will ‘magically’ appear.
Time to dust off your mouse ears and get ready to party.

All your favorite icons at each Walt Disney World theme park will transform into magnificent Beacons of Magic at night, coming to life with their own EARidescent glow.
·Cinderella Castle will illuminate Magic Kingdom with a dazzling radiance that sparkles with pixie dust.
·At Disney’s Animal Kingdom Theme Park, a warm light will emanate from the Tree of Life as magical fireflies gather to usher in the magic of nature.
·The Hollywood Tower Hotel at Disney’s Hollywood Studios will be awash in a brilliance evoking the golden age of imagination and adventure.
·And at EPCOT, new lights will shine across the reflective panels of Spaceship Earth, connecting to one another in a symbol of optimism resembling stars in a nighttime sky. The instantly-recognizable structure’s permanent new lighting will continue beyond “The World’s Most Magical Celebration” as a defining feature of the park. 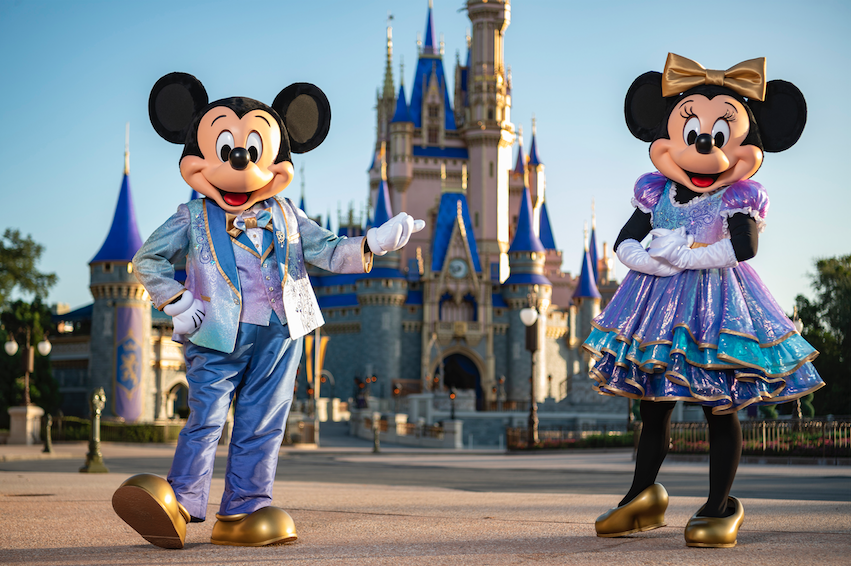 Mickey and Minnie Dress Up

Your favorite characters dress for the occasion, too. As hosts of “The World’s Most Magical Celebration,” Mickey Mouse and Minnie Mouse don sparkling new duds featuring – you guessed it - EARidescent fabric, really upping the ante on everyday glitter costumes!
Walt Disney World cast members join Mickey and Minnie, to welcome guests during this once-in-a-lifetime anniversary celebration of the place know fondly by so many as The Most Magical Place on Earth.

Elevate your travel experience! Sign up with your email address and receive exclusive, limited time offers and personalized travel recommendations.